how to crash a drone

For those of you who followed the massive 150-day multimedia road trip across Canada I put together in 2017, you’ll know that I had a drone. A drone was never something I intended to buy but after seeing one being advertised, and knowing I had this big road trip ahead of me, I went ahead and bought it. The only downfall of buying the drone was learning about all the restrictions that Transport Canada recently placed on them. Basically, I needed approval from each and every region we were visiting, local approvals, and really expensive drone insurance…$900 for the year to be exact. To put that into perspective, the drone itself was just over $1,000.

By the time the drone had arrived, I had just around two weeks left at home before departing for Newfoundland to begin the trip. I knew I wouldn’t be able to become a pro in such a short amount of time but I did manage to get outside for a few practice shots before using it to capture footage for the Road to 150. All in all, it was a GREAT investment as it really added production value to the videos and allowed us to score some BEAUTIFUL aerial shots of some of Canada’s most stunning landscapes. I also became a pretty good drone pilot along the way and even rescued the drone from a couple of close calls, one of which was in Newfoundland.

By the time the adventure was over, I had about 100 flights under my belt and felt pretty confident about operating the drone. Overall, I’m a very responsible person anyways and so I always followed all the rules and was pretty conservative with it. After all, I wasn’t about to buy a new one if I had crashed it and I really wanted to complete the trip with as many drone shots as we could get.

With this newfound confidence, I decided to bring it to Mexico for Christmas. My wife is from Mexico City and so we had decided to spent about four weeks down there for the holidays. Although Mexico City in and of itself is a spectacular place to visit, we also decided to go to Acapulco, Guanajuato, and a beautiful jungle paradise called Huasteca. Well, the region is called La Huasteca. The primary reason I wanted the drone in Mexico was to capture the beauty of Huasteca. This place is sooooo beautiful. It’s a relatively unvisited slice of Mexico, in the jungles, surrounded by snaking turquoise rivers and hundreds of waterfalls. There’s also sinkholes (as featured in the series Planet Earth) and surrealistic castles. It reminds of the movie Avatar. I really wanted to make a video on the whole area.

However, since Huasteca was our last place on the schedule, I first brought the drone to Acapulco to get some gorgeous beach shots and to Guanajuato to fly it over one of the most beautiful colonial cities in the world. Then, my time finally came for Huasteca. One of my favorite things to do there is to jump off a series of waterfalls. So, we all walked out into the middle of a waterfall and I began flying the drone backward to show us standing in the water and to give the viewer some perspective. Not expecting to fly the drone close to the canyon walls, I kept an eye mostly on the phone to make sure I was capturing the footage I wanted. Maybe because I was already nervous about falling in the water, I forgot to ask my friends to keep an eye on the drone, which is something you should always do. After flying out quite far, I decided to pan across. This is where I made my mistake. With all of us looking at the phone, I wasn’t aware of how close I was getting to the canyon walls. Then, all of a sudden, my friend Ricky looked up to see the drone and yelled out “Bro, you’re gonna crash”. Then, that’s it. My screen went fuzzy and I lost connection. I was in shock. Just like that, my drone was gone. The only one who noticed it, last minute, before it’s fateful crash, was Ricky, and he pointed up to a spot on the cliff, maybe 200 feet above where we were. It was truly gone. 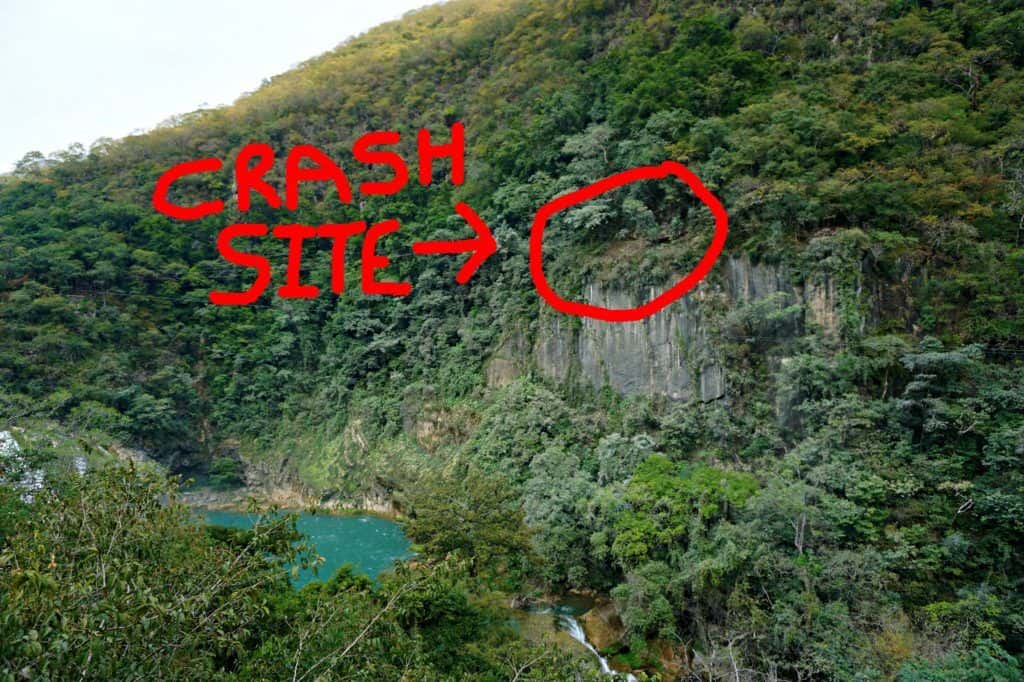 Then, a moment of hope. Ricky could still see the drone. I couldn’t see it at all but he said he could see this little white spec clinging on to a tree. The drone was way out of reach and there was no way to climb up there. Still, we all kept the hope and left the waterfalls to go back to the main road and get a better look at where it was. Once we all had an eye on it, we noticed something unbelievable. Just thirty days before we arrived, a company built a zip-line in the area and I had crashed the drone just 2-3 feet away from one of the platforms! I mean, what are the chances! We drove to find the zip-line guys and Ricky went with them on the zip-line to get it. 30 minutes later, they came back with the drone in hand! It was broken, of course, and totally un-useable in its current state, but I had it back, along with all the footage!

Seriously, what are the chances of such a mishap? I crashed the drone on the side of a cliff, maybe 200 feet above a fast-moving river and a series of waterfalls. It was clinging to one little branch where a stroke of wind could have easily knocked it off. Thirty days before my arrival, a company built a zip-line course in that exact area and I just so happened to crash it above one of their platforms. They were working that day so we got them to go and get it. It was broken but totally fixable.

It’s just a crazy story to me, and when I got back to Mexico City, I found a DJI repair shop and had them fix it for $100 CAD. Now it’s as good as new.

The only downfall is that the only footage I got of Huasteca is what you see in the video before I crashed.

Guess I’ll have to go back.

If you’re operating a drone, be very mindful of the surrounding area. You should always have a second person keeping an eye on the drone so that if you’re looking at the image on the phone, they can tell you if any dangers are present. And, if you do crash, don’t be immediately discouraged. You may have simply crashed it on a cliff next to a zip-line. You never know!