how to reinvent yourself

In the 26th episode of the Live Limitless podcast, I chat with Nancy Marmolejo of talentandgenius.com. 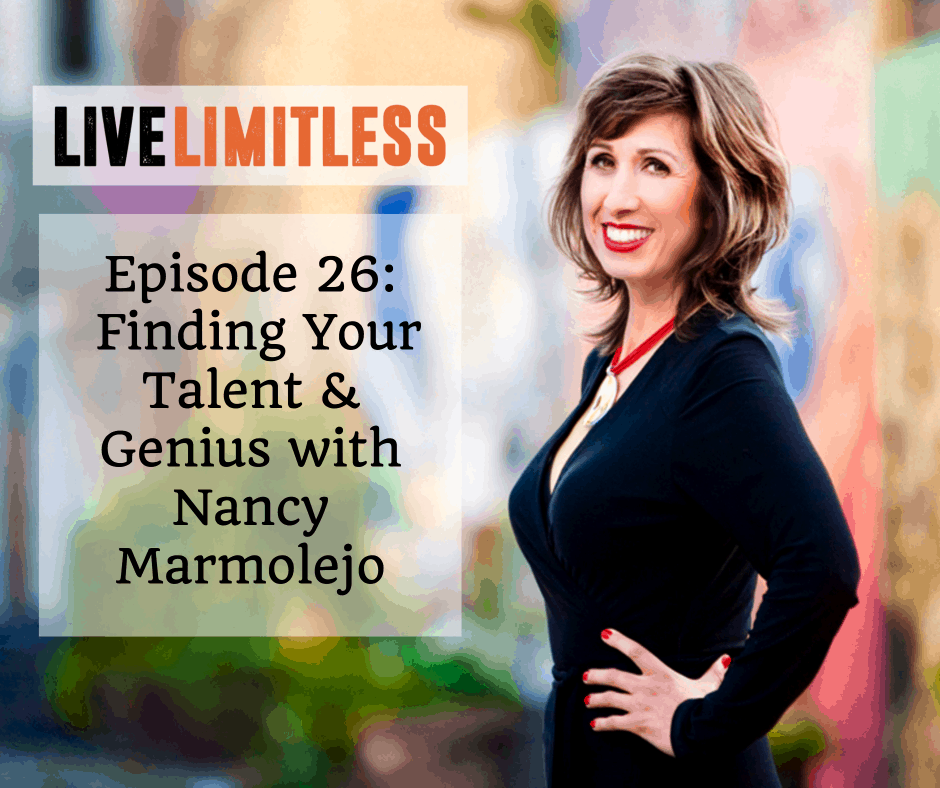 Nancy Marmolejo teaches entrepreneurs, experts, and teams how to tap into their unique genius and use it to position themselves as trusted authorities. Dubbed a “professional paradigm shifter”, Nancy helps people understand all they bring to the table, especially the parts of themselves they can’t see.

Since 2003, Nancy’s business consulting has helped clients from around the world expand their reach and impact. As a social media influencer, she’s known for her authentic and relatable style.

Nancy has won numerous awards for her business and has been featured in The Huffington Post, Smart Money, Redbook, Latina Magazine, The Orange County Register, Univision, NPR and more. She’s also the host of the top-rated podcast, Itenco: Lessons For The Leading Edge.

We do something extra cool in this podcast. Instead of a typical interview where I ask Nancy all the questions, we turn this around and Nancy gives me a live “coaching call”. I call these “workshop” episodes. It’s like a live case study because instead of Nancy telling us about what she does, she actually shows us what she does by helping me find my genius!

If you’re trying to figure out what your mission statement is, what your hidden genius is, and how to find your strengths and talents, this episode is for you!

END_OF_DOCUMENT_TOKEN_TO_BE_REPLACED

Back in 2009, I did something that I had been promising myself for many years. I embarked on my first long-term trip to New Zealand and Australia. For five whole months, I explored two new countries and challenged myself in ways I never imagined. I jumped out of an airplane, bungy-jumped off of the Auckland bridge, abseiled into caves, climbed a volcano, hang-glided over the sea, witnessed the twelve apostles, and scuba dived with sharks at night. Reading this makes me seem like some sort of adventure junkie, but I actually wasn’t…at the time. Sure I had slowly been exploring life’s possibilities and trying new things like white water rafting in the Canadian Rockies and riding as many roller coasters as I could, but still, I was a relatively shy guy who wasn’t really into adrenaline sports or thrill-seeking.

When I first landed in New Zealand however, I felt like a new person. I had this new zest for life. I had this incredible adventure ahead of me and I was free to do with it as I pleased. It was only 7 AM when I pulled up to my Queenstown hostel after an early flight from Canada when I noticed an advertisement for sky-diving. I figured “what the hell?”, and immediately signed up. Less than 30-hours after landing in a new country, I was up in a small plane, getting ready to jump out at 15,000 feet. END_OF_DOCUMENT_TOKEN_TO_BE_REPLACED

This was basically the biggest thing that changed my life. Growing up in a small oil mining city in Northern Canada, I didn’t really think of myself doing absolutely crazy things. I was surrounded by easy six-figure jobs (not such a bad thing) and aside from some small travel plans, didn’t really think much else.

But yet, something kept gnawing at me. Something deep within me said I needed to get out. I needed to explore the possibilities of life and really test myself. As a relatively shy kid with no real plans for life, I didn’t know what to do.

Then one day, I decided that I should move. Not because I didn’t like where I grew up but because I wanted to start fresh. I didn’t want to be held back by the social stigmas I had in the town I grew up in. However, I needed another reason to leave and so I applied and got accepted into college, which was something else I thought I would never do.

Although financially it probably wasn’t a good idea, starting fresh was the best thing I ever did. I decided to move to Calgary, Alberta, a much bigger city 750 kilometres South. Here I would reinvent myself and explore life’s possibilities.

I packed my 1992 Chevrolet Cavalier with clothes and a TV and hit the road for a long 8-hour road trip south. I spent the first couple of nights at one of my parents friends house as I searched high and low for an apartment close to SAIT Polytechnic, the school where I would be studying business for the next two years.

It didn’t take long before I completed yet another goal from my life list – Living in my own apartment.