In the 14th episode of the Live Limitless podcast I chat with Andrew Szeto.

I met Andrew in the comment section on a blog we were both reading at the time. After getting to know him better, I learned that Andrew was becoming a “full-time” copywriter while working full-time as a pharmacist. I thought it was very inspiring that Andrew would commit his free time to building up skills in a completely different field without giving up his day job. Andrew now has essentially two full-time income streams.

Besides being an all-around great guy, Andrew has become a really good copywriter and has built up his skills during his spare time. I invited Andrew on the show to talk about how he learned his new skill set, why he chose copywriting, how he found a mentor, and how he built copywriting into a full-time gig.

END_OF_DOCUMENT_TOKEN_TO_BE_REPLACED

The first WDS I attended consisted of only 500 people. This one was 3000. Six times the size in just two years.

Despite the rapid growth, it was one hell of a show. Kudos to Chris Guillebeau and his team who manage to blow away attendees each and every year.

10 Inspiring speakers took to the stage over two days to dispel their wisdom and motivate all of us to chase our dreams, challenge our fears and live remarkably. The welcome party had 3000 of us take over the Portland Zoo while the closing party had us create an epic dance party at Pioneer Square in downtown Portland. We also broke a world record, took a cruise down the Willamette River and connected with inspiring people from more than 30 countries.

It was a heart-warming, energizing and soul-lifting weekend.

But what happens after?

Someone I spoke to a few days later mentioned different sales conferences they used to attend. Sales conferences are different from World Domination Summit but still filled with motivational speakers inspiring people in their particular field. She mentioned how much she enjoyed those conferences and how inspiring they were but was always disappointed in the months that followed.

I understood what she meant. She was talking about all those crazy dreams and ideas that are born during the conference but slowly wile away as time goes on. Maybe she set her short-term goals too high or maybe she just didn’t work hard enough.

This happens to many people after a conference / summit. It certainly has to me. We hear all these amazing stories from people who have been primed to give mind-bending talks. They come out on stage and blast us with an hour of well-rehearsed and coached talks that fill our hearts and souls with all kinds of dreams and aspirations. We come home ready to tackle the world head on only to realize a few months later that nothing has happened or that our goals were not reached to the extent we had dreamed.

Did we fuck up? Were we tricked?

No, it’s just us. We can be motivated and inspired all we want but unless we actually take action, we won’t see any results. If we do take action, we need to realize that we are likely to fail along the way. The important part is to not let that stop us. We must learn from it and fail again, becoming “professionals” as we go.

Don’t let that inspiration fade away. We need your project. 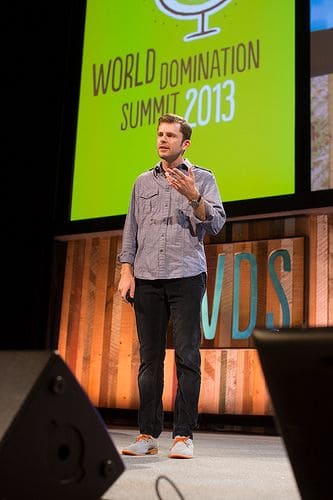 Here are some quick tips for what should come after the World Domination Summit:

1. Set some time for yourself to write down your thoughts after WDS. Try to capture that inspired version of yourself so that you can continue to look back on it when the WDS-momentum starts to fade. Jot down everything you can. Small ideas, big ideas, outrageous ideas. Everything. Use this as your starting block.

2. Get started on your project immediately. Don’t worry about it being the “right” one or not. Just get started on step one and move from there. If the idea changes, that’s fine because you’re learning as you go. If you never start, nothing happens. Even if you start with just 15-30 minutes per day, it will add up to a finished project and it will feel damn good!

3. Stay connected with the people you met during the summit and tell them about your project. This will not only help build the relationships but will also hold you accountable for getting your project out into the world. Another idea might be to form some sort of accountability/mastermind group for further accountability and collaboration.

Do you have any other ideas for continuing the momentum after a summit?

Feature photo and photo of Chris courtesy of Chris Guillebeau.

In the tenth episode of the Live Limitless podcast I chat with Colin Wright of www.ExileLifestyle.com.

Colin is an author, entrepreneur, minimalist and world-traveller. After becoming successful with his own design studio in Los Angeles, Colin realized that he wanted to travel full-time and really explore the world. To do so, he became a minimalist, selling everything he owned that didn’t fit into his carry-on luggage while scaling down his business so he could run it from the road. Since then, Colin has really carved out a name for himself, taken nude pictures with his beloved Macbook Pro, written many awesome books and recently co-founded a publishing company called Asymmetrical. Colin is getting ready to launch his latest book Act Accordingly on June 25th.

Listen below or download from iTunes by clicking here. (Please note: If you’re reading this from email, you may need to visit the site to listen)

If you’re running short on time;

(1:20): The mindset shift from Colin in LA to Colin today

(4:25): We talk about whether or not Colin ever had doubts

(6:55): What were Colin’s initial income streams

(9:08): Why minimalism is a great philosophy for anyone wanting a better, happier life

(11:40): How writing became such a big part of Colin’s life and how he built his skills to support it

(17:25): Whether having a story (such as having readers vote where you travel) is important

(22:37): We talk about philosophy in life and how to develop your own

Hope you enjoyed this interview with Colin Wright.

Please leave a review at iTunes and/or share with your friends.

Want more inspiration to live limitless? Check out this interview with Nora Dunn

In the third session of the Live Limitless podcast I chat with Niall Doherty of Disrupting the Rabblement.

Niall Doherty is the man behind www.ndoherty.com, where he inspires people to stop living like zombies and become more engaged with what they really want out of life. An advocate of thoughtful living, Niall not only decided to give up his “career” and become an entrepreneur but is also travelling around the world without flying.

END_OF_DOCUMENT_TOKEN_TO_BE_REPLACED 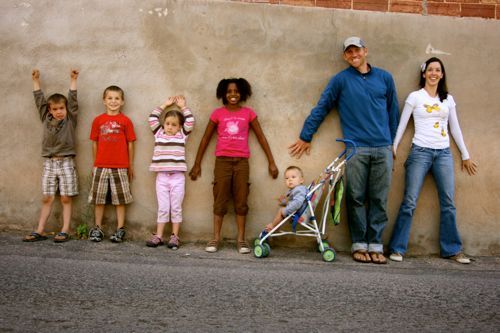 In the second episode of the Live Limitless podcast I chat with Greg & Rachel Denning from DiscoverShareInspire.com.

Greg and Rachel are the incredible duo currently road-tripping their way from Alaska to Argentina. But wait! They are also doing it with their five kids! After many years worth of family trips all over the world, they are currently in Guatemala getting ready to continue driving their vegetable-oil powered truck all the way down to Argentina.

As someone recently engaged, I was super excited and thrilled to know that long-term travel doesn’t have to stop when kids arrive. 🙂

This interview is entertaining and inspiring. I highly recommend listening to it all.

You can download it on iTunes and leave a review by clicking here or listen below.

1. Why they have stopped in Guatemala for over a year

2. What made them want to drive the entire length of the Americas

3. How they educate their kids on the road

4. How they fund a life of travel

5. What they’ve learned since embarking on this journey

6. What have been the most difficult challenges

7. Whether or not they were worried when crossing places like Northern Mexico and El Salvador

AND SO MUCH MORE!

(2:45): What made them want to drive from Alaska to Argentina

(5:55): How they take care of boring details like taxes and health care

(12:00): We talk about their vegetable-oil powered truck

(15:27): Some things they have learned on this journey

(30:18): When the family slept in a tent right beside the Mexican border

Really, this interview was great and is sure to not only inspire but to teach as well. World travel doesn’t have to stop when kids arrive.

I really hope you enjoyed this interview. If you did, please leave a review on iTunes and subscribe as well!

In the first ever session of the Live Limitless podcast I chat with Jacob Sokol of Sensophy.com.

Jacob Sokol writes for his amazing blog, Sensophy.com, where he inspires people to find their passions and live an extraordinary life. Jacob quit his lucrative job in New York City, travelled the world, became a life coach, and is about to launch a super cool online conference on April 22nd. He also accepted a challenge from a reader and ended up going to a New York Jets game with Gary Vaynerchuk.

If you’re interested in signing up for the WTF Should I do with my Life virtual conference on April 22nd, Click here to take a look. (affiliate link)

If you enjoy the interview, please leave feedback on iTunes and share your thoughts below.

(7:10): Why changing your environment can really change your life in a good way

(11:18): Jacob tells us about his experience of attending a Jets game with Gary Vaynerchuk

(15:50): We discuss why, even during hard times, Jacob still turned down a 6-figure offer for a lucrative job in IT

(20:30): Jacob introduces a virtual conference he is doing with Brian Johnson on April 22nd

(23:00): We talk about a new project Jacob is working on involving helping people travel

(27:15): How do we translate an ah-ha momentinto lasting change

I hope you enjoyed this interview as much as I loved doing it.

Feel free to share your thoughts in the comments below. If you’d like to ask Jacob something, share it below as well and he’ll come take a look. 🙂