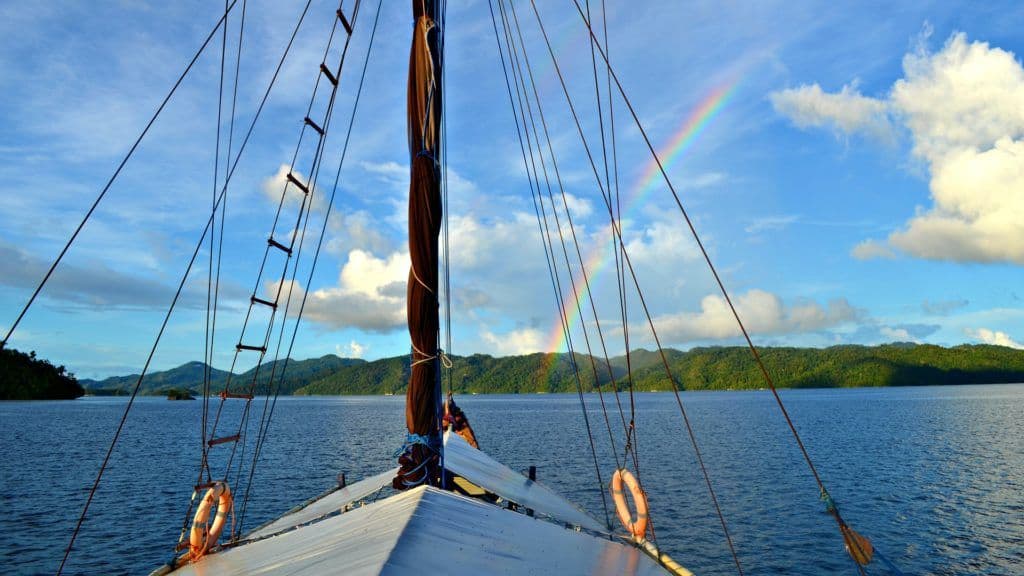 This remote archipelago on the far east of Indonesia is known for having the richest marine biodiversity on Earth, which includes more than 600 species of hard corals and over 1,700 species of reef fish. END_OF_DOCUMENT_TOKEN_TO_BE_REPLACED

It’s a really special feeling to be standing on a boat looking out over gorgeous paradise that up until now was just a dream. Just a place that I wanted to visit one day. And now, I’m here. I made it happen, and just for a moment, the scenery around me seems extra vibrant.

As I thought about the sheer awesomeness of sailing around the islands of Raja Ampat, the bell rang for our dive briefing. It was time to get into the water. I was standing on the Jaya, an old sailboat used by Wicked Diving to host budget live-aboard diving trips in one of the most biodiverse areas in the world. When the sails are open, it looks like a pirate ship but this is done only for photos. The onboard engine makes it much easier to navigate at will.

Briefings are done before each dive. It’s important that scuba divers know what to expect in the water and so one of the guides explains to the group about the next dive, the currents, and anything else that might be helpful. It takes about 10 minutes and then it’s time to slide on our wetsuits (slide makes it sound too easy. It’s much more of a struggle), prepare our masks and fins, hook up our BCD, and step into the zodiac. END_OF_DOCUMENT_TOKEN_TO_BE_REPLACED

I have to say, this is one business name that completely suits the atmosphere of the place. As soon as I stepped foot in the Chillhouse, I felt like I was in some kind of a cool, laid back house with tons of friendly people. Staff learn your name quick and greet you as soon as you enter the dining room. The guests, who usually stay 7-10 days, get comfortable with each other and you begin to feel your amongst friends. Super cool! 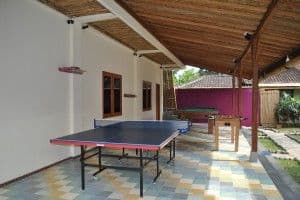 I was given a rundown on the place and then shown to my room; a cool, hip, woodsy, and big room with a 4-poster bed and a huge sliding door. Unfortunately, we were not right in the Chillhouse but actually in the budget/spillover area next door. Either way, it was tremendously cool place with vibrant colors, hammocks, a deck, and a fridge stocked with beer. Need I say more? Although we were eager to rest in the very comfortable bed, we knew we had to try out one of the two pools the Chillhouse had to offer. Nothing like a refreshing dip on a hot day and then capping it off with a game of billiards, ping-pong, or foosball, which were all next to the bar.

As the day became late, we took one of the free bicycles and made way to Canggu beach to watch the sun set over the black sand. The beach was different than others we had experienced. Besides the black sand, the low-tide revealed the immense array of rocky formations and mini tide-pools that allowed for some fantastic photos of the hot sun calling it quits for the day. As the orange globe melted into the water, we were enchanted by the look of the mini-pools scattered all over the area. When the sunset ended, we headed back to eat an amazingly tasty buffet dinner and relax before the hard part began the next day.

Canggu beach is definitely not a place I’d first recommend for the beginner although the difficult water could make you a pro faster than the easy stuff. The waves were massive and the currents were very strong but after 20 minutes of stretching under the morning sun, we hit the water and experienced the force that the sea had to offer. Of the 2 hours “surfing” that we had that day, I would say 1.5 of it was spent paddling against the big waves and the current to avoid being dragged back to the rocky beach. We didn’t accomplish much on day 1, although spending time learning to surf always feels rewarding at the end of the day.

The next day, sore and bruised, we headed back to the beach. After a light beach jog and more stretching, we hit the water once again. Like the day before, the current wiped the energy right out of us but not before I had the chance to stand up a number of times and even “ride” for as long as 10 seconds, allowing me to really feel the experience of surfing.

Standing up on a surfboard is an incredible experience but one that takes a lot of effort to achieve. Besides the 3-4 times I rode the wave (read: white-water), I spent most of the time paddling out to sea and against the current, killing my back, arms, and neck in the process. It’s worth it though. 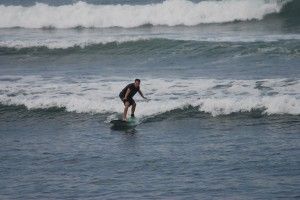 The next morning was checkout time and although we were too sore to get out of bed, we made it out for one more surf lesson, which consisted mostly of me lying dead on the surf board. Surfing is a very rewarding experience and an activity everyone should try at least once. Just being able to feel the power of the wave as it pushes you towards the beach at high speeds is exciting enough and being able to stand up and ride it is a major bonus that will make you feel on top of the world…err water.

In my opinion, a trip to Bali wouldn’t be complete without a surf break, and the Chillhouse is a highly recommended place to go, especially if you really want to LEARN how to surf and not just try it out for a day or two. The accommodation is some of the coolest I have seen, the atmosphere is like a college dorm without the rowdiness, and the food is amazing. It’s a surf retreat and one we recommend if you really want to get away from it all and chill out near Canggu beach. If you do go, don’t forget to rent one of the Chillhouses vintage scooters ($6) and ride to the famous Tanah Lot, one of Bali’s prettiest temples, despite the immense crowds. 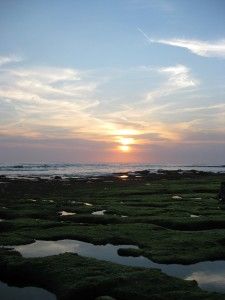 A simple Hello begins the greeting. It starts the connection. It leads to all possibilities.

It’s this word that has created so many adventures for me during my travels. It’s the word that breaks the silence and acknowledges someone else. It forms the possibility for the next word or the next sentence. It begins the path to endless possibilities.

Below is a story of an adventure that started with a simple “hello”.

I was in Bali, Indonesia. I had just arrived in a cozy place called Ubud. Ubud is quite popular as it’s known to be an artsy community, somewhat quiet and laid-back, and it also had something I really wanted to see; the monkey forest. After being dropped off by the bus, I immediately walked around the streets looking for a cheap place to lay my head and most importantly, lay my bag. As I walked down the main strip, a young Indonesian guy told me he had a room to show me. I followed him down a tight little alley (not as scary as it sounds) which brought me to a little bed and breakfast. He showed me the room which ended up being quite nice, included breakfast, and was just $9/night. I took it. END_OF_DOCUMENT_TOKEN_TO_BE_REPLACED 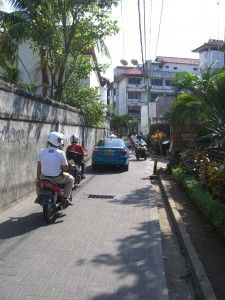 One of my favorite parts about traveling is the people you meet along the way. The locals and also the other travelers. When traveling alone, making friends is something you will find yourself doing as different adventures present different opportunities.

This process is actually quite easy on the road as other people are in the same position. At home, you would never catch me at a bar alone, but on the road, I do it all the time without question. The best advice I can give is to make yourself open. END_OF_DOCUMENT_TOKEN_TO_BE_REPLACED