That’s the song I hummed to myself as I watched thousands of leaf-cutter ants march their way to their nest with pieces of leaves on their backs. It was equally cute and impressive to see these tiny creatures marching side-by-side all over the place. Millions of them! Of course, this was just a small part of Madidi National Park, a slice of jungle heaven in the Bolivian Amazon. 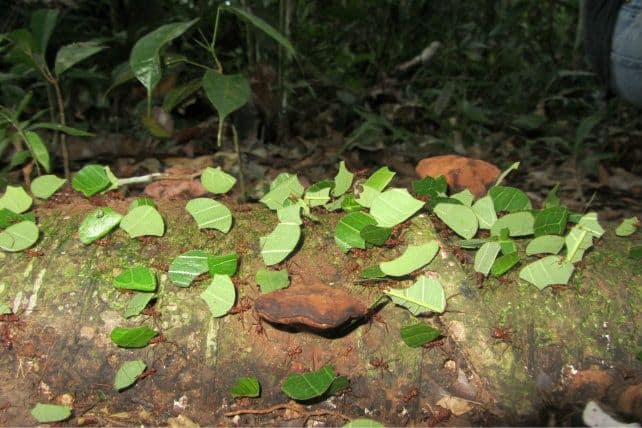 There’s something peaceful about going to sleep in a candle-lit room with nothing but jungle sounds to sooth you to slumber. One night while my wife and I sat reading at an outdoor table, we saw monkeys jumping from tree to tree under the moonlight. It was magical.

We’d wake after a 9-10 hour sleep and walk our way to the main lodge for a delightful and hearty breakfast, walking by the friendly neighborhood tapir, a wild but somewhat domesticated animal that has been in the area for 2-3 years since being rescued by the Madidi Jungle staff. He was left as a baby near the river, possibly because a Jaguar had scared his mother away. After finding love from the staff as well as food, he decided to stick around, although he does wander off for weeks at a time. I’m told that as he approaches adulthood, he will likely leave to find a mate. I wished him luck – Adorable little-big guy. 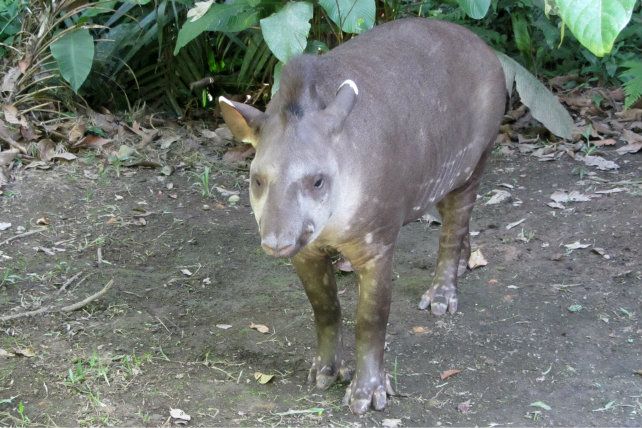 Between delicious meals and tranquil rests, we’d participate in a couple three-hour nature walks every day. Though this is the jungle and animal sounds abound, It’s actually difficult to see a lot of wildlife. This is primary forest after all and the critters are skilled at not being seen. Our guide however was very skilled at spotting them and even smelling them. We’d mostly see birds from a distance but every now and then we’d get excited for a herd of wild pigs that had released a VERY foul smell upon sensing our presence. We didn’t end up finding them that day but we certainly knew they were there. Surprisingly, even after a three-hour hike with no animal sightings, all the amazing things we were learning thanks to our amazing guide Norman kept us amused and educated. He was teaching us about all the incredible plants and trees in the area. Trees that grow legs to help it lean in where the sun is shining; trees that grow a super strong wood that even termites can’t penetrate; trees that grow massive thorns so animals can’t climb up; Massive mother trees that provide fruits in the dry season when no other trees do (a lifesaver for the entire Amazon ecosystem); The wild cocoa tree, which produces a stronger and better chocolate. I was told some Europeans are already exploring the area and considering exporting for their chocolatiers. 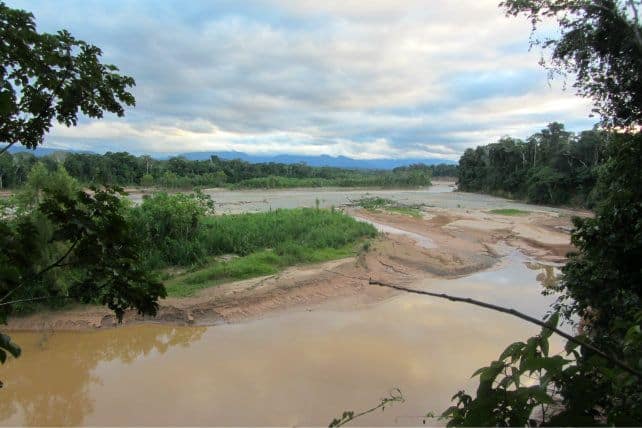 The jungle is filled with mind-boggling things. We saw many termite nests, ant nests and even a humungous wasp nest, the latter being seen with binoculars. Thankfully. These termite and ant nests are massive and architecturally sound. Our guide also showed us a variety of medicinal plants and fungi in the area. According to the indigenous, many of these plants provide cures for cancer, diabetes, arthritis, kidney problems and many other illnesses. It might just be a matter of time before many of these plants are seen in pharmacies. Then again, maybe not.

After a delicious dinner, we were invited on a night-walk through some of the nearby trails. While we didn’t see any animals, we did see a couple of different species of spiders. One was the corner spider, which we saw lurking near our cabins. The other was the jumping spider, which we surprised with the flashlight. Norman places the light close to him so we could watch him jump. It’s all fun and games until he sinks his fangs into you. We also found a toad and a couple of frogs as well as many sparkly and glowing spider eyes. It felt almost eerie to see so many little eyes all over the jungle. One of the most amazing sights was the bioluminescent fungi, which Norman kindly found for us. Bioluminescent fungi! I was already impressed with seeing spider eyes sparkle in the night but being able to witness what looks like glow-in-the-dark mushrooms was truly out-of-this-world. As we continued on down the path we found a clearing where we stopped, looked out over the river and gazed up at the absolutely stunning stars, complete with the Milky Way and the Southern Cross. We slept like babies that night. 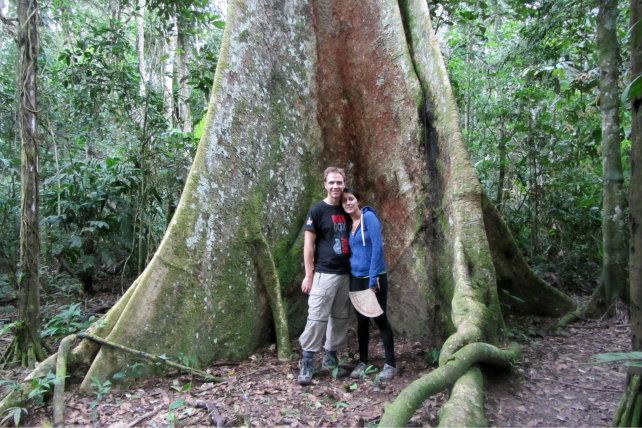 The next day we changed it up a bit and took the boat to a different trail system Norman wanted to show us. It wasn’t long before we finally spotted two Red Howler monkeys, which we had wanted to see since day one. They weren’t that close but the binoculars helped us get a better view. The Red Howler is actually a descendent of the Orangutan, which Norman explained to us. After another hour exploring the area, we decided to head back to camp. Rather than taking the motorized canoe however, we jumped on some inner tubes and enjoyed a relaxing and scenic float down the river. I never imagined myself leaning back in an inner tube in the Amazon River, bumping into little rapids along the way and hoping a Caiman wasn’t looking for his lunch. 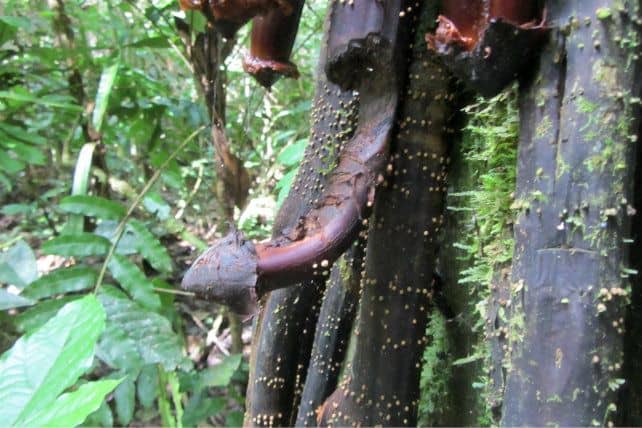 The next day during our hike through the jungle we finally stumbled across the herd of wild pigs, which we had only smelled on past hikes. It was amusing to hear them snort their way through the bush, only to stop suddenly when they sensed our presence. As we stared in awe of these stinky creatures, the pigs started to raise the hair on their backs like giant mohawks and began making loud clicking sounds with their teeth. According to our guide, this meant that the pigs were getting angry and were ready to attack if they felt the need. As I watched in excitement, I heard Norman making a strange noise, which he claimed was a special sound to help calm the pigs down. These wild pigs after all could have easily killed us if they wanted to. Luckily, they just ran off as we moved closer. We were happy to finally see them, though not that happy to once again walk into their horrid stench. As the sun dipped down and the sounds of crickets emerged, we sat down for our most memorable meal of the trip; A traditional feast of boiled catfish wrapped in leaves. It was incredibly tasty and a delicious way to end our last night in the jungle. 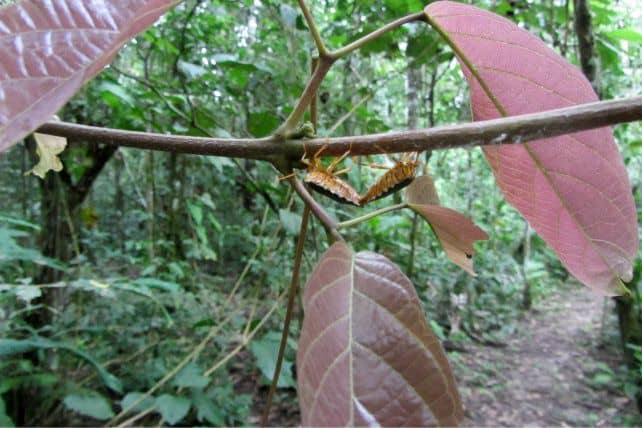 After our morning hike the next day, our guide Norman showed us how to make these really cool traditional rings out of a “nut”, which look great after being sanded down and polished with burnt paper. The rings are actually used in the local indigenous community for wedding ceremonies, which added to the sentiment. After one last scrumptious lunch, we bid farewell to the beautiful Madidi Jungle Lodge and headed back down the river to the main town of Rurrenbaque. 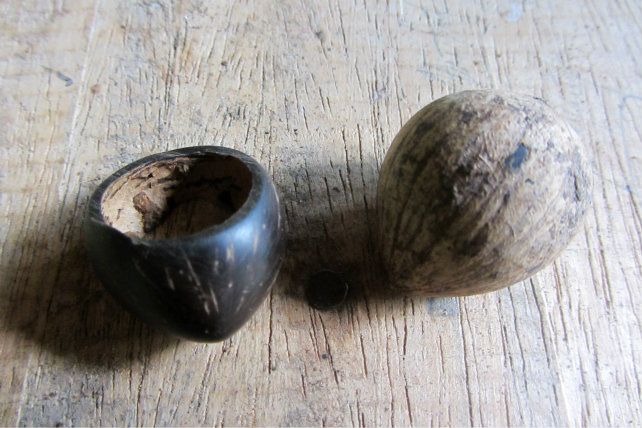 Surprisingly though, our adventure wasn’t over. Not too long into our journey, we stopped at a popular nesting ground to see giant macaws nesting in mud holes on the side of a cliff. It was so amazing to see these colourful creatures in their natural habitat. Mating for life, these monogamous creatures were all in pairs, whether in the mud holes or in the trees. They weren’t too far away but the binoculars certainly made the experience that much better. On the walk back to the boat we passed a tree that was crawling with hundreds of little but aggressive ants. Our guide then explained the unique relationships these ants have with the particular tree it was on. The ants use the tree as a home, feasting on the sap, and in return, they provide protection from other pests and parasites. 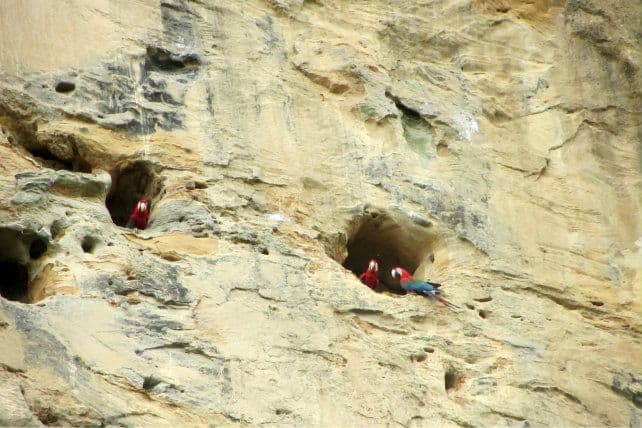 Nature is incredible and Madidi National Park is a great way to get up close and personal with some amazing natural wonders and develop a much deeper appreciation for the way the world and its many delicate ecosystems work. On our peaceful boat ride back to town, I really took in the lush jungle scenery all around me while basking in the breeze of the wind. The thick primary Flora; The mountain peaks; The murky river. All of it was perfect. As we approached the town of Rurrenbaque I couldn’t help but wonder what the pampas had waiting for us with Norman as our amazing guide once again. I knew we were in good hands and was told that the pampas (wetlands) had much more animal activity than the jungle because there is less trees and the animals tend to congregate around the water. While I was certainly sad to leave the tranquil setting of Madidi Jungle Lodge, I was very excited for the next Amazonian adventure we were going on the next day.

If you end up in Bolivia, I HIGHLY recommend visiting Madidi National Park and the Pampas. Simply incredible. This experience was made extra special by Madidi Jungle Lodge, which just so happens to be the company doing the most positive things for the community, including the formation of Madidi National Park. Check them out. They are the best company in the area.