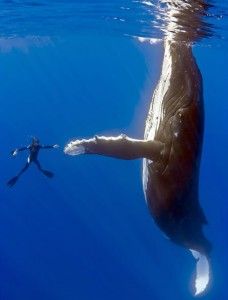 The whale was following its typical migratory route when it became tangled in hundreds of pounds of crab lines causing her to struggle. As she struggled to become free, the lines became even more tangled around her body, tail, and around her mouth. The lines were becoming so tight around the whale that they were cutting into the blubber and leaving marks in the skin. The whale knew it was in trouble.

Just when the whale surely thought it was going to die, a fisherman spotted her and called for help from environmental groups. Within hours, divers were jumping into the water to cut her free. The divers wrestled for hours with the nets, cutting away with their knives until they finally freed the whale.

Inspiring enough indeed but the truly incredible part was the gratitude the whale showed its rescuers. The whale began to swim in circles of joy while greeting each diver personally with nudges and pushing them gently around in the water.

The man who cut the rope away from the whale’s mouth said her eyes were following him around and winking at him while he set her free. He said he will remember this moment all his life. The whale was being affectionate and showing its appreciation to each and every diver.

It’s time like these that make you want to think twice about the cruelty inflicted upon animals and the extinction they face because of us.

Who or what can you help today?

or can be thankful for them having helped you get through a tight situation?

Read more about the whale here.

As a heads up, the site is getting a makeover and a more finely tuned direction that I want to take it. It should be ready just in time for the new year so I hope you like. If your into self-exploration, getting out of your comfort zone, trying new things, and becoming adventurous, please subscribe as this site is for YOU!