The Galápagos is famous for its animals and this is why. The islands are one of the best places on earth to witness evolution. These marine iguanas are one of those evolved species that only exist in the Galápagos. It is thought that these iguanas came by raft from South America thousands of years ago. Due to the desert-like volcanic conditions of the islands, some of the iguanas had to evolve in order to eat. By developing a lateral flat tail and spiky dorsal fins, marine iguanas have become graceful swimmers. They’ve also developed sharp claws for clinging onto rocks in strong currents as well as a flat nose, which they can press against sea rocks to eat the algae. They can dive up to nine meters deep. It’s an incredible thing to witness.

But we did much more than that. 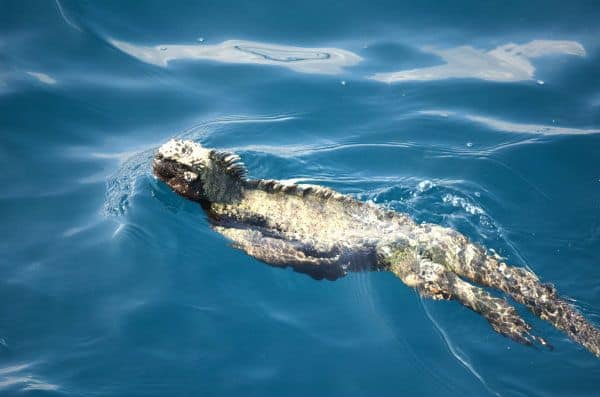 Onboard the Aggressor live-aboard diving yacht, we had already been out at sea for five days of diving with friendly seals, hammerhead sharks, dolphins, barracuda, tuna and all sorts of amazing creatures – but I couldn’t wait to see the marine iguanas. As we approached Fernandina Island, we anchored the boat and waited. It wasn’t even noon yet and our guide told us that we would see the iguanas start moving from the land and into the water. Our kitchen crew prepared us a delicious lunch and we sat at the outdoor tables waiting for the show to begin.

About an hour later, we could see movement. The iguanas, which up until now were getting a tan on the beach, started to walk towards the water. One by one and then three by three, the marine iguanas began swimming out towards the boat. Once they were about two hundred feet from shore, they would just sit there with their little heads bobbing out of the water. Thirty minutes later, they began diving down. This is when we geared up and jumped in with them. 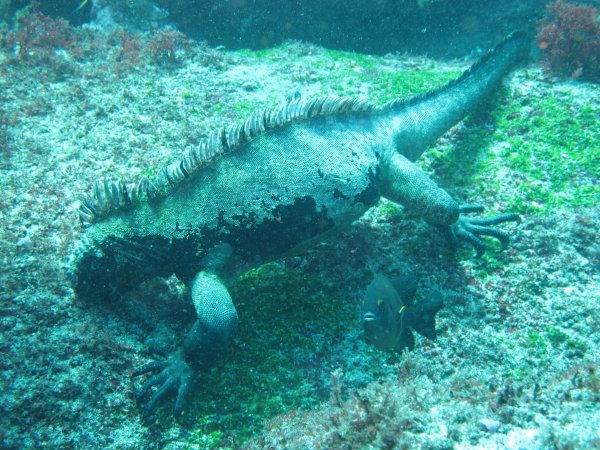 Our maximum depth was only eight meters, which meant we could let loose and not worry about safety stops and the typical dangers of diving. Most of the time, we were only five meters deep and could easily surface if we needed to. This lead to a much more relaxed and fun dive – and then came the iguanas.

It felt like I was diving with prehistoric creatures. These little godzilla-looking reptiles swam right next to me until they clinched onto a rock and pressed their flat nose up against it, nibbling on the algae. At the same time, fish would nibble on the iguanas skin, which made me laugh so hard I almost spit out the air-piece. It was so comical to see fish pecking at the iguanas face and watching the annoyed look on the reptiles face. No one likes getting their face pecked at. 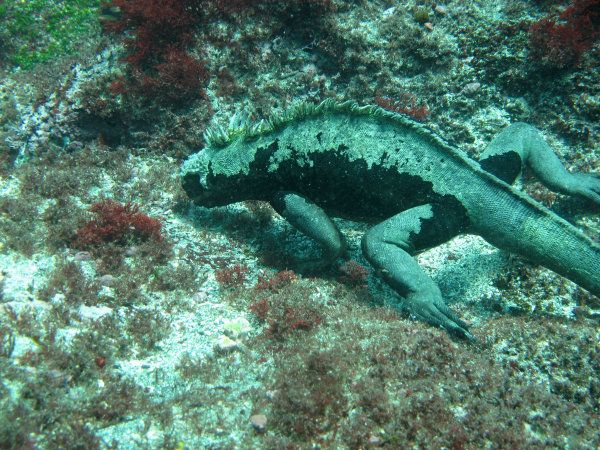 As the iguanas nibbled on the algae, I would do my best to get as close as possible. I become so fascinated with wildlife and unique encounters that I like to stop myself from moving and just watch. Just be there and own the moment. The iguanas didn’t seem to care as I watched him eat his lunch. Once it had enough, it would launch itself off of the rock and use its tail to swim to the surface, keeping its little arms by its side. I still remember the image of the iguana swimming to the surface while the suns rays glistened through the water.

Moments later, as I swam around finding more iguanas, I came by a big orange seahorse. This wasn’t your normal miniature seahorse – this thing was the size of my hand. As I got up close and personal, I could see the two air holes on top of its head, opening and closing as it glanced towards me. Its tail was wrapped around a plant, stopping itself from being swept into the current.

As the dive closed in on one hour and the oxygen tanks began to empty, my wife and I decided to have some fun, flipping ourselves over and floating upside down with our fins laying flat on the waters surface. It was an interesting feeling, though I’m not a fan of being upside down for very long. 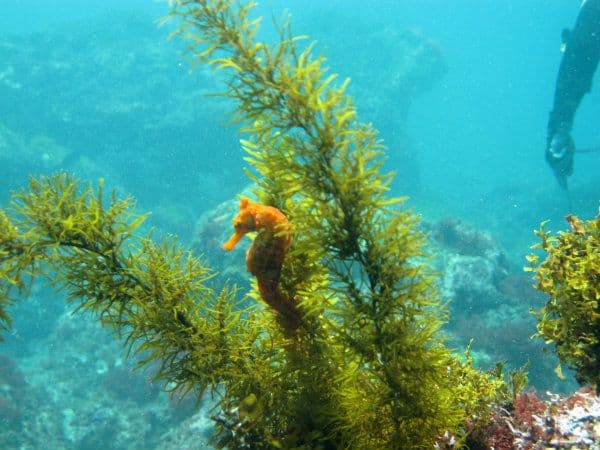 Eventually, the kid in me had to let go of the moment and call the dive quits. I inflated my vest and popped out of the water, waving to the kodiak boat to come pick me up. For someone that had some scary/questionable dives earlier in the week, it was a welcome relief to just relax and let loose on this shallow dive. The iguanas were not only entertaining but incredibly beautiful to see in their natural habitat. This is one dive you can’t do anywhere else on Earth and I am so grateful to have had the opportunity to experience it. After pulling myself into the inflatable boat, I looked out towards the baron land and saw reptile head after reptile head resurfacing from their afternoon picnic.

Have you been diving before? What’s been one of the most memorable experiences? Share in the comments below!