I can’t believe you jumped out of a plane!

This was one of the many reactions I received upon returning from my 6-month adventure through New Zealand and Australia.

I couldn’t really believe it either. It seemed like just a few years ago I was too nervous to get on the rollercoaster in West Edmonton Mall because it went upside down. I never would of thought that I would be scuba diving in the ocean at nighttime or jumping off bridges in New Zealand.

When I look back on life as a kid and as a teenager I can definitely see little bits of the adventurous soul in me but nothing compared to what it is today.

One of the biggest leaps I made that began my journey of self-discovery was packing up my things and moving to another city. I was 20 at the time and was growing tired of the town I had grown up in. It was a rich town where everyone made heaps of money working in the oil industry but for some reason I just didn’t want anything to do with it. I had all these dreams bottled up inside of me of adventure and mystery. I wanted to explore the world and all the amazing things that exist beyond the place I grew up in. I decided to take a leap and move. It was an exciting time leaving home and living on my own in a much bigger city. I enrolled in business school and rented a place right across the street. Life was great.

My first “out of the box” experience was just days after arriving in Calgary. I was walking up and down the streets looking for an apartment when a car pulled up and asked me if I had found a place. It was 2 guys around my age and one of there moms. They were looking for a place as well and told me to call them if I needed a roommate. Normally I would have been way to shy to call back but since I had no friends at the time, I decided to give him a call. I told him I already had a roommate but would like to meet for a beer. He agreed and became one of my best friends throughout college.

After that initial success with pushing some boundaries, it seemed that the “out of the box” side of me really flourished. I began to randomly expose myself to new adventures so that I could experience life from many different angles as well as find things I was passionate about.

It started off with smaller things like organizing a group of friends to go on a New Years ski trip, finding an acting agent who scored me a month long background continuity role in a “Hollywood” movie, and trying out for the Canadian Olympic speed skating team having never speed skated before.

I enjoyed all of these random adventures and I also enjoyed the attention I would get from friends. They were always amazed at the new stories I would have for them every time they visited.

As I piled on more and more adventures and random activities, my confidence grew and it just snowballed from there. I realized how exciting it was to throw myself into different situations and how much it kept my life fresh and new.

I started to value the notion that one day I would be dead and how unhappy I would be if I hadn’t experienced all I could. There is such an immense world of inspiration and opportunity out there and I was damned if I was going to let it pass me by.

Although I was doing all these random activities, I also began to realize some of my bigger dreams had yet to be accomplished. For years I had told friends and family about this great fitness challenge called Body-for-Life and yet I had still never attempted it. I had told everyone since I was 17 about traveling to Australia and New Zealand for a year but had never even been as far the United States. I used to hate being that person who told people about their dreams but didn’t actually do anything to make them happen. People would tell me that I had been talking about it for years and would ask why I haven’t done them yet.

I had to do something about it. I wanted to be the guy who went after his dreams and lived a life of adventure.

After another year or so, I finally decided to commit myself to the 12-week fitness challenge. I told all my friends I would not be partying for 3 months and that I could only go out to eat once per week on my free day. For 12 weeks, I woke up every morning and went straight to the gym. I ate 6 healthy meals per day 6 days a week and barely had a sip of alcohol. There were many obstacles during that time like starting 2 new jobs (where people want to take you out) and dark mornings with temperatures of -30C where all I wanted to do was stay under the blankets. I kept telling myself I had to complete the challenge or I would never forgive myself. 12 weeks later, I cut my body fat down from 22% to just 10%. I gained 7 pounds of muscle and lost 22 pounds of fat. I felt amazing! The before-and-after pictures were astonishing and suddenly everyone around me was congratulating me and asking advice on how they could do the same thing. 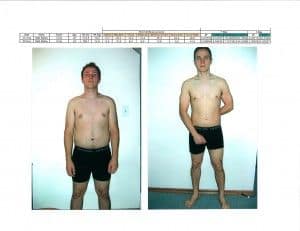 I was finally in good shape for the first time in my life and now I wanted more challenges. I knew, like most people, that I was shy to talk in front of a group of people. Not only is it a number one fear to stand up in front of people and give a speech but I also had a speech impediment all my life that gave me a bit of a stutter. Sometimes it caused me to repeat words and sometimes I couldn’t say a word at all. I knew a big part of me wanted to act in a movie one day and that I had to be able to say words in front of an audience so I found a course called the Dale Carnegie Effective Communication and Human Relations course and enrolled. It was another difficult 12-week program that was sure to improve my speech in some way. It was pretty nerve racking each week for everyone, as we had to give weekly speeches as well as perform the most ridiculous plays in front of the group. I felt even more odd since many of the students were CEO’s and managers of large organizations.

Although I still need to work on my public speaking skills, that course really made me feel much more confident in talking to people as well as acting a little goofy. I started to realize that I shouldn’t care as much what other people think and that I should just give everything a shot.

After reading books like the Four Hour Work Week, I decided I finally had to start traveling. I began with a few shorter trips alone until finally booking my dream trip down under.

It was during my 6 months in New Zealand and Australia where I really began to flourish and meet my adventurous soul. I ended up hiking for 3-4 days at a time through the mountains of New Zealand, jumping out of an airplane, abseiling into caves, jumping off a bridge, kayaking the Abel Tasman sea, Scuba diving the Great Barrier Reef at night time, Jumping in a SUV with strangers for a 3 week road trip down the east coast of Australia, renting a motorbike for the first time ever in Indonesia to go visit elephants and monkeys, hang-gliding over Byron Bay, and surfing the waves of Australia and Indonesia.

There was no turning back. I had awakened the adventurous giant that had been dormant for so many years. I had torn my self created “box” to shreds.

If you feel like the soul inside of you is anxious to free itself, I urge you to Tear your artificial box to shreds and start living the life you’ve always dreamed of living.

Start slow! Most people don’t go from shy and timid to auditorium lectures and jumping off a bridge. Start slowly so you can give your confidence a chance to form a solid foundation. For adrenaline-type adventures, I started with rollercoaster’s and then moved into white water rafting. What can you do in the next 2 weeks to stir up some fears inside you?

Say Yes! When you see a poster for learning how to salsa dance or trying out for an Olympic sports team, don’t discount it just because you’re shy or think it’s stupid. If it interests you at all, go for it! You don’t need to make the team. You just need to know that you tried and use it to build your confidence for the next task. Go to an event and learn something new.

Act Goofy! See if there are any classes or groups you can join for speaking or acting. Even if you don’t want to be an actor or a great public speaker, it REALLY helps build the self-confidence and gives you skills that will help you in so many areas of life. It will loosen your inhibitions and make many tasks much easier.

Go alone! Having friends join you can be fantastic fun but is will almost always hold you back from many adventures. What are you holding back from in hopes that a friend will accompany you? For me it was travel and the timing never seemed right so I finally just went by myself. I had the time of my life! The confidence you will gain is unbeatable and suddenly your FREE to do anything you want.

Accomplish a GREAT goal: Physical challenges are great because they challenge you both physically and mentally. They improve self-confidence and self-esteem. When people feel and look good, they become more confident in other areas of life. It doesn’t have to be a physical challenge but it’s something that worked for me. What’s a challenge that you have wanted to complete but keep putting off for a “better” time? Is it public speaking, travel, learning to cook, speaking another language, or losing 20 pounds of fat? Whatever it is, commit to it NOW and see it through to the end.

Once you decide that your going to realize your dreams and start doing the things above to get yourself in motion, there’s no stopping you.

If you like what you see and want to continue being inspired, Join the tribe. It’s free and you can always unsubscribe with the click of a button. 🙂