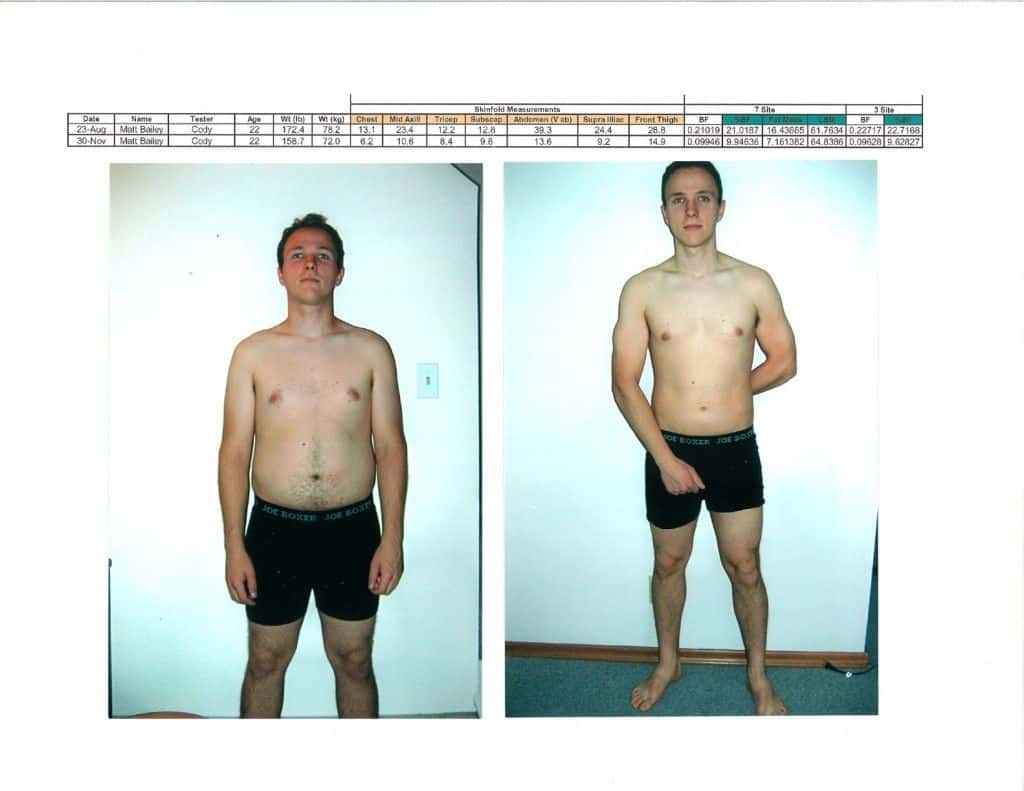 It actually took me awhile to realize this.

I grew up as a chunky kid throughout elementary and junior high school and always looked at myself as being out of shape. Even after completing this challenge, I could barely see my changes until I looked at the before-and-after pictures. It’s amazing how our minds can trick us.

After college, I had gained an extra 20 pounds of beer and burger fat and finally decided to commit myself to the 12-week Body-for-Life challenge that I had wanted to do since I was 17. I made a promise to myself that nothing was going to hold me back this time. No parties. No alcohol. No cheating. These 12 weeks would be one of my greatest challenges to date but one worth completing. I hit the gym six mornings each week and ate six healthy meals every day except for my one “off” day, which happened I enjoyed on Sundays.

On Monday, Wednesday, and Friday, I would spend about 45 minutes lifting weights, alternating the days between upper and lower body. On Tuesday, Thursday, and Saturday, I would run intervals on the treadmill for 20 minutes while alternating speeds from low intensity to high intensity. 20 minutes doesn’t sound like a lot, but when you’re alternating speeds for 20 minutes, it’s tough! Most importantly, I ate six balanced meals every day, combining portions of protein, carbohydrates, and vegetables. I never counted calories, I gave up alcohol almost entirely for the 12 weeks, and I drank a lot of water. 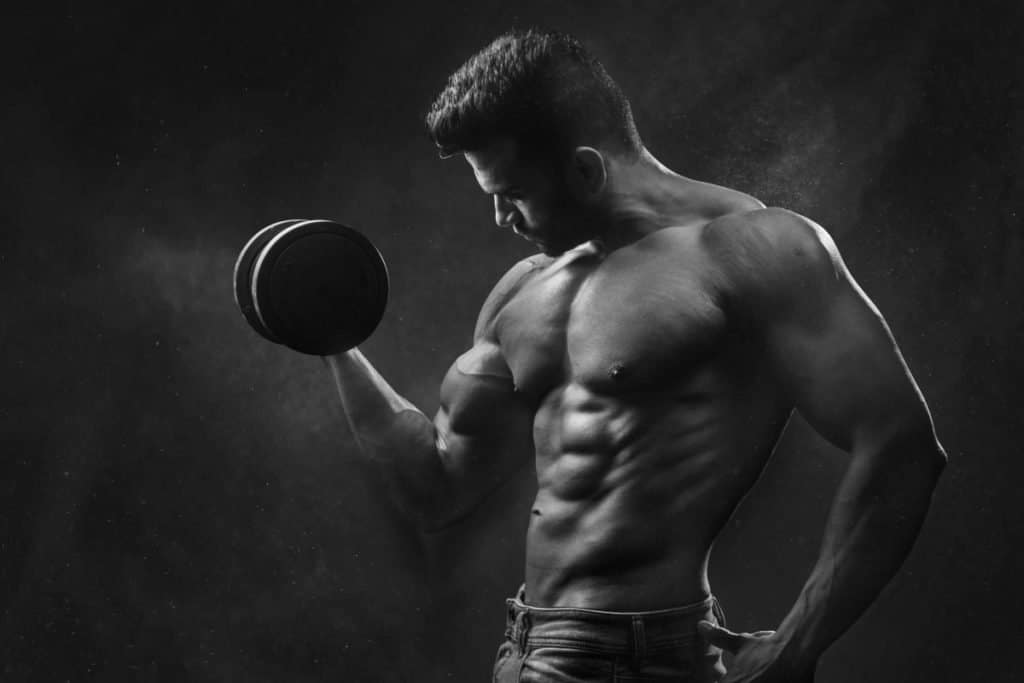 It’s funny, because after 12 weeks, I could tell I was healthier and stronger but it was hard to see the difference in the mirror. My mind still looked at me as someone out of shape. My girlfriend told me that I looked very different but the shock didn’t truly hit me until I saw my before-and-after pictures and had my body fat percentage tested.

The trainer who took my measurements was amazed. I had gained over 7 pounds of muscle, dropped 21 pounds of fat, and cut my body fat percentage in half from 22% to 10%. He was amazed that I had done this in just 12 weeks. So was I.

Once I had my pictures developed, I felt absolutely incredible! I could finally see the changes I had made by committing to a program and following through.

When you commit to a program for a long period of time that is both challenging and difficult, the feeling you’ll have when you’ve accomplished it is hard to beat. There were times during the 12 weeks that I wanted to throw in the towel. I remember walking to the gym at 6 a.m. when it was -35 Celcius outside (arctic weather) and dark. I really wanted to stay in bed those mornings but I forced myself up, threw on multiple layers of clothes and headed for the gym. Remember, I told myself at the beginning that nothing was going to stop me this time. Some nights were terrible for sleep. I may have slept just 1-2 hours but I still dragged my ass to the gym.

It has now been more than 8 years since I completed this program and I haven’t gained back almost any weight. Most of the habits I formed during those 12 weeks have stayed with me. I haven’t gone to the gym as much and I don’t eat as frequently but I do make sure to stay active and eat healthy most of the time.

Still, it’s time for another fitness challenge, as I’d like to gain some mass and get leaner than ever. I’m considering doing Tim Ferriss’ 4-week fitness routine and then another Body-for-Life. I’ll keep you posted but until then, if you’re looking for a solid program that completely changes your physique, follow these simple tips:

For more info, check out Body-for-Life which is the plan I followed for 12 weeks. I have been thinking of putting together an easy recipe book for these 6 meals if anyone is interested. Just let me know via email and if it’s wanted, I’ll make one. 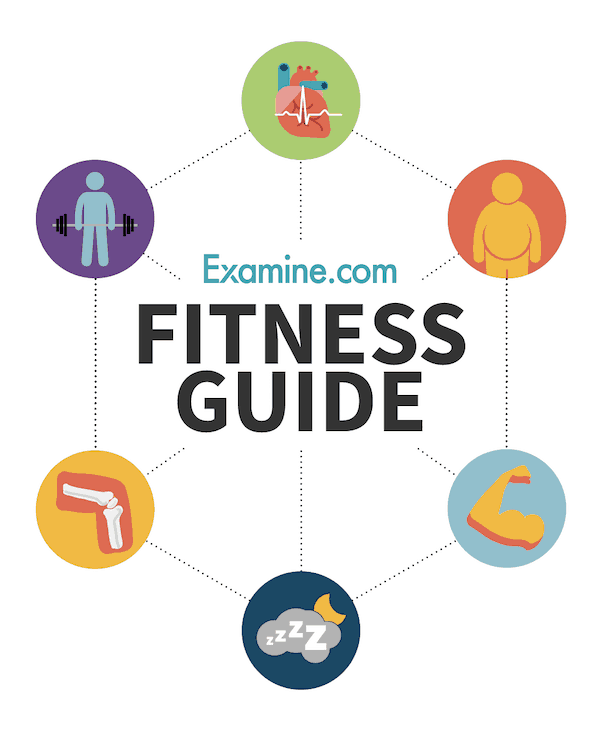 Update 2019: There’s been a lot of studies done since the time I did this program. From what I’ve read, the amount of times you eat per day doesn’t matter that much. Weight loss comes down to calories in and calories out. If you want the truth about fitness and nutrition, without all the biases that is so rampent in the industry, check out examine.com. I love looking at their free information but they also just released a comprehensive fitness guide for less than $100. It talks about everything from nutrition to fitness to hormone levels. Get that if you can. Read it front to back. Now you’re good to go and you can ignore all the information that gets blasted in front of you each day. Let’s face it. The fitness industry is a money-making machine. But in the end, the basics are simple.

The best advice is to stick with it! If it’s your first time doing a routine, almost any program will work for you. You just need to stick with it. Don’t weigh yourself every day. Do it once a month or every 2 weeks. When you weigh yourself every day, it’s almost impossible to really know what’s going on. You might just have more water in you one day and be heavier. Maybe you lost three pounds of fat but gained four pounds of muscle. The true test will be with the body fat measurement which I highly recommend doing before and after a fitness program. I also recommend taking photos. My only regret is not having professional photos taken at the end, which would have highlighted my gains much more. I’m terrible at taking notes but it’s strongly encouraged since it mentally keeps you on track.